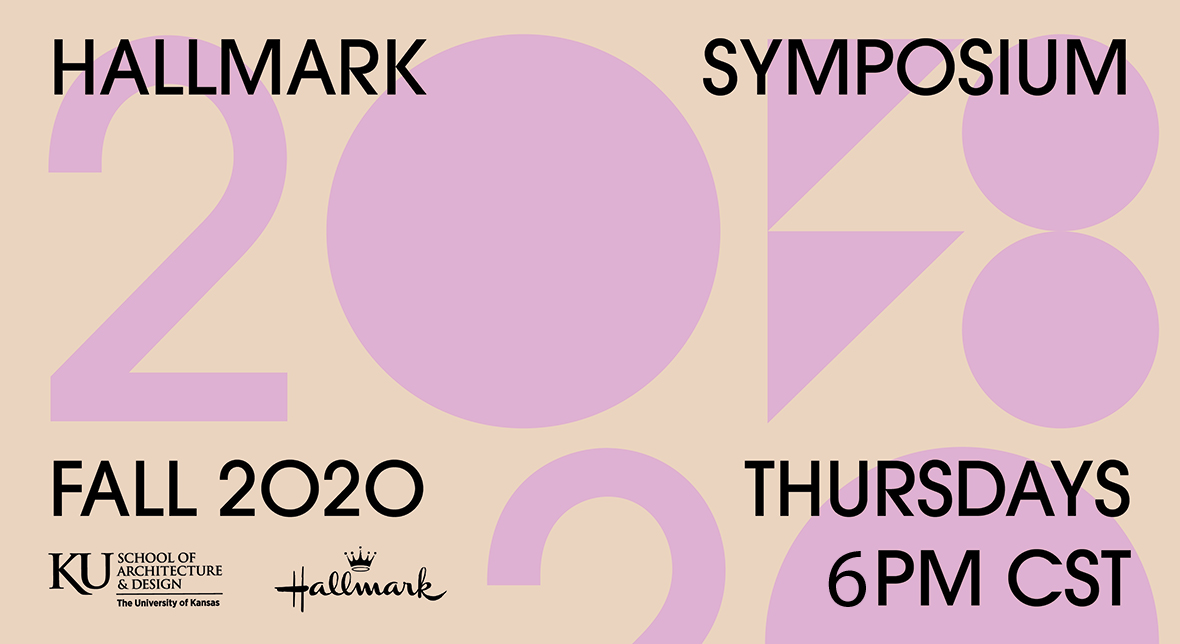 LAWRENCE — The School of Architecture & Design at the University of Kansas has announced the Fall 2020 Hallmark Symposium Lecture Series lineup.

The Hallmark Symposium Lecture Series was established in 1984 through the generosity of the Hallmark Corporate Foundation with the goal and intention of enriching the education of students at the University of Kansas and in support of those in particular in the Department of Design through exposure to designers, artists and educators from the United States and abroad. During these nearly 30-plus years of collaboration, approximately 10,000 students have been exposed to this rich array of practitioners.

Andy Pizza is an American illustrator, podcaster and public speaker based in Columbus, Ohio. His illustration client list includes The New York Times, Nickelodeon, Amazon, YouTube and Warby Parker. His Creative Pep Talk podcast, a motivational podcast for creatives, has been featured by Apple, BuzzFeed and Threadless. His book, Creative Peptalk, was published by Chronicle Books in the Spring of 2017.

Paul King is the product design executive for Mattell Inc., where he has worked for 16 years. He has previously worked in various product design roles at Slingshot ID LLC, Hauser Inc., Joss Design, Benrus Watch Company and Kemnitzer Design. King received a BFA in industrial design from KU.

Paul Conrad is a concept artist and production designer for animated and live-action films. His client list includes Pixar, Walt Disney Imagineering, Marvel Comics, Nickelodeon, Lego and others. A multi-faceted designer, he has worked professionally on projects related to brand identity, apparel, packaging and illustration.

Kelli Anderson is an artist, designer and tinkerer who pushes the limits of ordinary materials and formats by seeking out hidden possibilities in the physical and digital world. In 2008, she worked as part of a large team, including the Yes Men, to distribute a meticulously recreated copy of The New York Times — filled only with articles from a utopian future. As a group, they won the Prix Ars Electronica Award of Distinction in 2009. In 2011, she created a paper record player that garnered attention from numerous media outlets including Mashable, Kottke, Slashdot, Make, PCWorld, Swiss Miss, Wired, the Toronto Star and NPR. Her work has been published by Wired UK, Gestalten, Rockport Publishing, iDN, How Design Magazine and Hemispheres Magazine. In 2011, she left her position as a digital collections photographer at the American Museum of Natural History to focus on independent work.

Drew Voegele designs and conducts usability, benchmark and telemetry-based research as a contractor for Microsoft Game Studios. He has a bachelor's degree in cognitive psychology and a master's degree in interaction design/design management, both from KU.

Jenn Ely is a freelance artist based in Portland, Oregon. She is currently working developing a color script for an upcoming stop-frame animated feature film, "Pinocchio," directed by Guillermo Del Toro and Mark Gustafson for Netflix.

She mostly works in animation as a visual development artist, illustrator and production designer for a variety of commercial, film and television animated projects.

Kris Graves is an artist and publisher based in New York and London. He has been published and exhibited globally, including the National Portrait Gallery in London; Aperture Gallery, New York; University of Arizona, Tuscon; among others. Permanent collections include the Museum of Fine Arts, Houston; Brooklyn Museum, New York; and the Wedge Collection, Toronto.

Graves creates artwork that aims to use art as a means to inform people about social issues. He also works to elevate the representation of people of color in the fine art canon and to create opportunities for conversation about race, representation and urban life.